First in the Philippines to offer separate themed community with exclusive amenities right in the heart of the booming Sta Rosa City and just 5 minutes away from various commercial establishments.

The Stanford Suites is a one-tower condominium located inside South Forbes, a world-class community comprised of international-themed residential projects in a private enclave of Sta. Rosa – Silang – Tagaytay. Specifically, it is located along Laguna Boulevard in Silang, Cavite. Silang is a first-class landlocked municipality on the east side of the province of Cavite. It is 43 km south of Metro Manila and bounded on the north by General Trias, Dasmariñas, and General Mariano Alvarez (GMA), by Amadeo on the western side, and by Tagaytay on the south. It is politically subdivided into 64 barangays.

The Stanford Suites is strategically located in an area with easy access to all the needed establishments of its residents. Unit owners with children won’t have a hard time finding a perfect school for the education of their kids since the Stanford Suites is near several prominent schools in the South. One of these schools is the South Forbes City College, which is just 300 m in walking distance from the condominium. Another is the Caritas Don Bosco School (3.8 km), a Catholic co-education institution that offers academic programs for pre-kindergarten, kindergarten, grade school, junior high school, and senior high school. The De La Salle University - Laguna Campus is a mere 5.6 km away or a 10-minute drive from the condominium. Otherwise known as the De La Salle Canlubang (DLSC) or as the De La Salle University Science and Technology Complex (DLSU-STC), it is situated in a 55-hectare property across the Laguna Technopark District. It offers kindergarten, elementary, secondary, and tertiary education programs.

Another plus for the Stanford Suites is that it is also nearby several commercial centers. The Paseo de Sta. Rosa, the third largest complex in the province, is only a 7-minute drive or in a 4 km distance. It is a premier lifestyle center and retail landmark in Greenfield City in Sta. Rosa City that has been a favorite dining, shopping, and leisure center of many. It also houses several outlet retail shops. Solenad, a shopping hub located at the center of the Nuvali eco-city in Sta. Rosa, offers a wide range of shopping and dining options to the residents of nearby towns and provinces. Solenad 2 is 4.7 km away from the Stanford Suites, while the Solenad 3 is 5 km in distance. Nuvali also houses the S&R Membership Shopping, which provides a world-class shopping experience to its members.

The Stanford Suite is also near the Rustan’s Supermarket, SM City Sta. Rosa (14.5 km), Robinsons Sta. Rosa (15.6 km), Puregold Price Club Sta. Rosa (11.1 km), Festival Super Mall Alabang (26.1 km or 35 min drive), Alabang Town Center (27.4 km or 37 min drive), South Supermarket Starmall, and many others. Launched officially in 2006, the SM City Sta. Rosa is one of the SM Supermalls in Laguna owned and operated by the SM Prime Holdings, Inc. Like other SM shopping malls, it features the SM Supermarket, SM Store, a wide range of restaurants and retail shops, SM Cinemas, Quantum (one of the largest amusement centers in the country), and all kind of establishments. Festival Supermall, now known as the Festival Alabang, is one of the most popular shopping malls in the south. It is owned and operated by Filinvest Alabang, Inc., a subsidiary of the Filinvest Land, Inc. It is the fifth largest mall in the country. The Alabang Town Center, on the other hand, is otherwise known by the locals as ATC. It is a shopping, lifestyle center owned by the Ayala Malls and, in fact, the oldest Ayala mall in the Philippines. It features high-end retail stores such as the Rustan’s Department Store and other high-end international brands.

Located along Sta. Rosa – Tagaytay Road, it is also near popular recreation and leisure centers in Laguna such as the Splash Island (16.7 km), the Enchanted Kingdom (10.2 km), the Republic Wakepark, and the Microtel South Forbes Destination Hotel (1.6km). The Splash Island is the largest water park in the Philippines with a total of 20 attractions, located at Southwoods Ecocentrum in Biñan, Laguna. The Enchanted Kingdom, on the other hand, is the first ever world-class theme park in the country.

Within its vicinity also are several industrial centers such as the Nuvali Technohub, the Ford Motor Company, the Matsutisha Electric Philippines, the Santa Rosa Business Park, the Laguna Technopark, the Monde Nissin Corporation, the Toyota Motors Philippines, and the Coca Cola Bottlers, Inc.

Within the South Forbes are two churches where residents can spend quiet time for their religious activities. These churches are the Don Bosco Church and the St. Benedict’s Church. 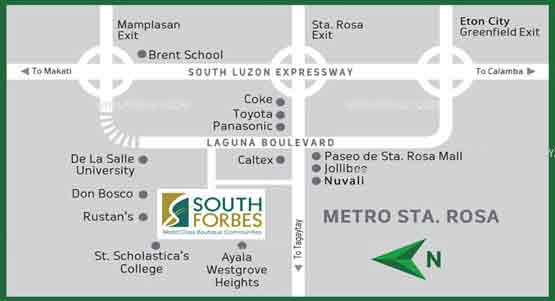